Music is the heartbeat of this novel about the world of hometown musicians, the jamming venues, the contests, the onstage cues, the subtle rules. The story focuses on four musicians: Carl Bradshaw, an aging Oklahoma fiddler; Amy Chandler, a young dumpling who can outpick most guitarists; Jack Martin, who lives in the shadow of a successful father; and Cora, an older woman on the edge of a world she believes can t be hers. The novel's structure reflects the sets of a performance on stage, with smaller sections that serve to introduce the musicians. Song titles, phrases, and sounds are part of the language, as are the characters styles in speaking about music, creating it, and performing it. With its winning evocation of the joy of playing together, The Universe Playing Strings will remind readers of the movies Once and Crazy Heart.

Amazon, Barnes and Noble, and other bookstores.

The Universe Playing Strings is held together by music, by characters playing music, singing songs, making their own songs. A character thinks, ‘Life had moments of perfect beauty―the highest reach, the clearest note―and such surprises, over and over.’ Not surprisingly, this book is a perfect beauty of a novel, a long song that hits all the notes.―Thomas Fox Averill, author of rode.

In this unapologetically sentimental novel about the country and bluegrass scene in Tucson, Arizona . . . the Kettle and music unaccountably defy the drama.  "This is magic, isn't?" Amy remarks to Cora. "This whole troop of people." Publishers Weekly.

A taut little novel . . . almost sweet as the characters struggle not just for fame and acceptance but to better themselves. They love music. They love themselves as musicians. And they love each other. And in the end, they are better for all of it. Sandra Dallas, Denver Post.

Kinder's book reads as cleanly as Vince Gill plays guitar and would be a welcome addition to reading lists, not only for music lovers, but for all those fascinated by the diverse roles people play in life's symphony. Jack Ventimiglia, Daily Star Journal.

A lovely composition, The Universe Playing Strings sings the universal song of human longing for connection. The undertone of a wordless answer to loneliness and doubt runs beneath its lines of elegantly crafted prose. Meagan Logsdon, Foreword Reviews. 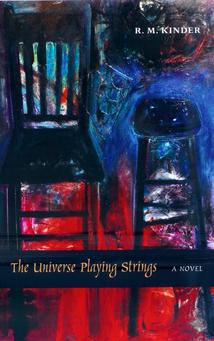